Sue became a Cape Wine Master in 1989, after writing a research project on “Pinotage”, South Africa’s only homebred variety.

She is a member of the international jury at Concours Mondial de Bruxelles, as well as competitions in Slovenia, Italy, Spain, Switzerland and Argentina. Sue is a freelance wine writer with monthly features in the Wineland magazine.

She has also been a regular guest on Cape Talk and Punt Gesels Radio, on all matters wine and travel.

She was the Public Relations Officer for The Pinotage Association of South Africa in 1997 & 1998. Sue presented lectures/tastings on the luxury liner Queen Elizabeth 2 in December 2000 from Cape Town to Southampton. She was a member of the screening panel for South African Airways wine lists for a number of years and is a consultant to a number of SA’s top estates, which includes writing promotional material. She has been on the tasting panel of The Oaks Wine Club for over 10 years.

She is consultant to restaurants and hotels wishing to upgrade their wine lists. Sue was a senior lecturer at the CWA from 1987-1996, and senior examiner and course co-coordinator from 1988-1996. Sue made her own wine (Chardonnay & Cabernet Sauvignon) at Buitenverwachting in 1999.

Her other interests include travel, wine and food with a special interest in olives and olive oils. She has visited the wine areas of France, Austria, Switzerland, Italy, Greece, New Zealand, West Australia, South Australia, Slovenia and Spain. Sue holds a BSc (with Teachers Diploma), from Stellenbosch University. 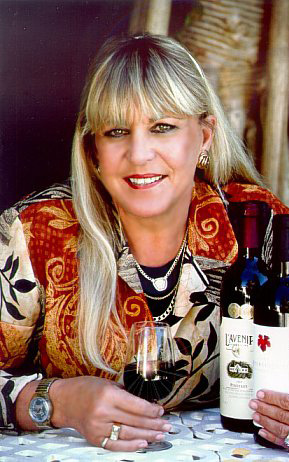