After completing an introductory course in South African wine at the Cape Wine Academy, she augmented her studies through reading books, travelling to various wine regions, attending shows and joining several tasting groups.

She started her wine career in 2004 under the mentorship of her brother-in-law Andrew Gunn of Iona Vineyards.

During the decade that she has been involved with marketing and selling Iona wines in the Western Cape, Eastern Cape and KwaZulu-Natal sales have increased by more than 300%.

Henderson, who originally hails from Bedford in the Eastern Cape, is the second youngest of five children, and grew up on a sheep farm which is still being farmed by her parents.

After matriculating from the Diocesan School for Girls (DSG) in Makhanda (formerly Grahamstown) in 1984, she graduated from UCT with a Bachelor’s degree in Primary Education in 1988 and taught at various schools in the Western Cape for 15 years.

During that time she married, had three children and tutored extra maths and music lessons, before venturing into the world of wine.

Music, travelling, cooking, and sporting activities (including mountain biking) are her main interests.

2019 - Henderson, Jacqui - A case for Chardonnay as a regional signature grape variety for Elgins cool climate 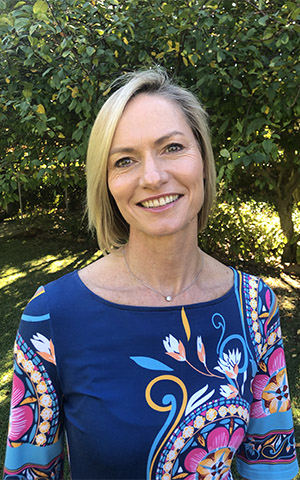