Sandy’s business career was in advertising, at Draft FCB and later her own business, MILLS CREATIVE. Sandy manages the Old Mutual Executive Wine Club which she started in 2001. Her Cape Wine Master’s thesis was on Wine Clubs, and she won the La Motte Award for Excellence in Viticulture. In 2013 she received the ‘Ordre des Coteaux de Champagne’. In 2014 was inducted into the ‘Grand Conceil du Vin de Bordeaux’. In 2015 she completed the Michael Fridjhon Tasting Academy. Sandy is a judge for the (IWSC) International Wine and Spirits Competition both locally and in London, is a lecturer at the Cape Wine Academy and is one of three travelling judges for the National Distell Inter Hotel Challenge since 2015. As of 2019 she also judges for the Michelangelo International Wine & Sprits Competition.

Sandy is married to Mike Harper and lives in Sheffield Beach, KwaZulu Natal. She has two daughters; Megan, age 24 and Lauren, age 21.

2014 - Harper, Sandy - The relevance of informal wine tasting clubs as a potential marketing channel for small and new wine brands 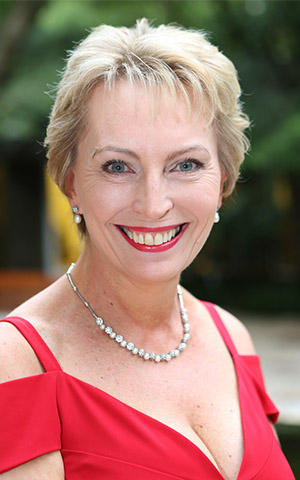