Margie entered the wine world in 1986, when she did CWA’s Introductory Wine Course, after completing a part-time MBA through Wits Business School in Johannesburg.

She was looking for something that would be fun to study, and as far removed from business management, as it was possible to get. So much fun did she find the course, that she repeated it 4 years later, to keep a friend company. For one memorable week, the two of them were registered students for the CWA’s introductory course, the Certificate course, and the then Diploma 1 course.

As an accounts person, hailing from Johannesburg, Margie was very much an armchair wine enthusiast. She tackled the CWM program in 1996, just to see if she could do it. She still rates passing a viniculture exam “from an armchair” as one of her highest achievements! She gained her CWM diploma in 2000.

The subject of her dissertation was “The Internet and Wine”. In 2002, Margie moved to the Cape for a two-year stint, just to see what it was like. She joined the CWA in Stellenbosch, as their accountant. Less than a year later, she was set the task of re-structuring the Diploma course into a 4-module system, and re-developing the course material, including the preparation of PowerPoint presentations for each lecture.

Margie and her architect husband, fellow Cape Wine Master Greg de Bruyn, live in Somerset West. Since 2005, Margie has been looking after the financial matters at Ken Forrester wines, just outside Somerset West. 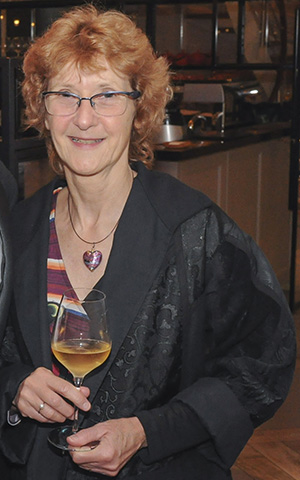 The internet and wine