“Why Germany and why in March?” they asked when we announced plans for our next overseas trip.

Well, we’d never been to a major international wine fair as paying public, free to roam the halls and sample exotic offerings, to come and go as we please. It’s all very well having the company pick up the tab for your trip, but it means you’re tethered to the stall for days on end, either battling to cope with the crowds, or watching them wistfully as they file straight past you to some more illustrious neighbour.

Prowein was the target fair in Dusseldorf from 17 to 19 March. The venue and dates make very little sense; Dusseldorf is in the commercial/industrial north-west of Germany, the heart of beer country, and March is still the tail-end of winter, when all the tourist facilities are hibernating. However, we had heard this was the one to do as it is the world’s biggest, well organised (they’re Germans, after all) and user-friendly.

If we’re going all the way to Germany, we reasoned that we might as well stop over in the winelands. This included visiting the famous slopes of the Mosel and Rheingau, exploring ancient river-side villages and schlosses and sampling the wares. A thorough web-search of Google Earth, Google Maps, Tripadvisor and Deutsche Bahn indicated that it would all be quite achievable on public transport. We were flying direct from Cape Town to Frankfurt, so it was less than an hour by train to Koblenz, our home base for 3 days. Koblenz is German for “Confluence”, because of its location at the junction of the Mosel and Rhein rivers, more precisely marked by the monumental Deusches Eck (corner), which was mere metres from our charming little apartment.

Pretty much everything was closed. Our visions of whiling away the hours in vinotheques, exploring the weinstubes (bars) and weingüter (wineries) evaporated in a haze of churches, civic monuments and medieval village squares. Not that we have an aversion to the historic achievements of our forebears, but try to imagine wineland touring without the wine. 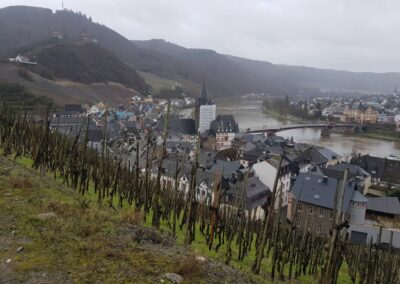 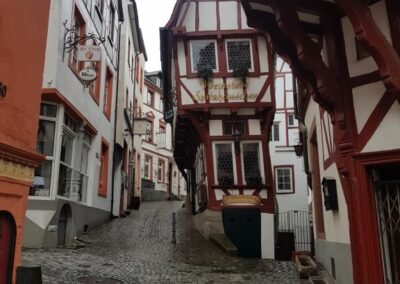 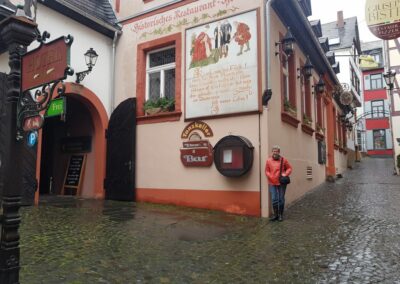 Bernkastel, halfway down the Mosel on the way to Trieste, is the spiritual heart of this great wine region, and the Berncastel Doctor is arguably Germany’s most famous vineyard. It’s only about 60km from Koblenz as the crow flies, so I pencilled in a day trip by river boat, maybe stopping at a few other villages on the way.  I researched getting there by public transport – river-boat, train or coach – and established that you can’t, at least not out of season. The only option is a taxi, for about €70 each way. That’s about the same as the cost of a rental car for two days and a hotel for a stay-over, so that’s what we did. I had reservations about driving on the right side of the road and threading a car through ancient villages, especially since our previous holiday on Lake Como, but the Germans have fine autobahns and they generally drive well, so it worked out just fine.

Our hotel, the Doctor Weinstube, established 1668, was the epitome of old-world charm, and within spitting distance of the hallowed terroir. It was cold and rainy and everything was closed, but we explored the old quarter and river front and tramped up the precipitous slopes of black slate, conscious of being in the presence of something holy. In season, this beautiful village must be sensational, with shambling old buildings, steep narrow cobbled roads and food and wine everywhere. We couldn’t find an open bar, so we crossed the river to Keus and tracked down a vinotheque that was about to close, but we managed to talk them into a tasting of Dr H Thanish Doctor Spatlese 2014 and came away with a precious bottle of it for our cellar.

Our next stop was Dusseldorf. Again, the train trip was effortless, if a little slow, and we arrived in the city centre in mid-afternoon. Accommodation during the fair is in high demand and the best I could find, even in early December last year, was an Airbnb apartment in Meerbusch. If you look it up on a map, you’ll see it’s only about 5km from the Messe (exhibition centre), so it seemed an inspired choice. A closer look at the same map will reveal that the shortest route by car is over 15km, or alternatively a bus and two trains via the city centre. Many people spend over an hour getting to the show, but all public transport is free if you have a ticket to Prowein, and there’s more than enough time left for wine business. 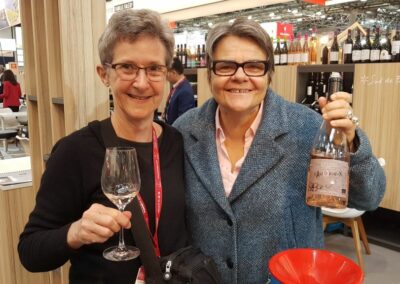 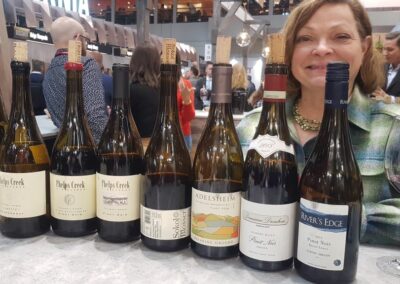 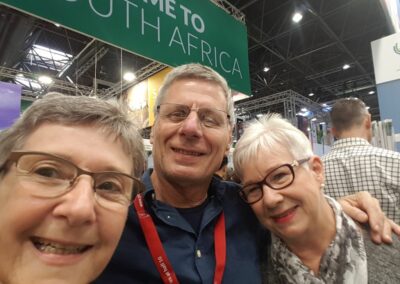 So to the crux of the matter: Prowein.

When they said it was big, they weren’t kidding. There are ten halls each about the size of of the WOSA Cape Wine CTICC exhibition. France, Germany and the Rest of Europe each occupy two halls. Spain and Portugal, the Rest of the World and Austria and Greece occupy one hall each.

We realised we were out of our depth and headed for the security of the South African area, which was probably the most impressive and biggest of all the overseas exhibitions. It costs a fortune for a stall here, so even the high-flyers confine themselves to a small cubicle and leave it to the big distributers and corporates to take the end and corner sites. South Africa did itself proud, even if some of the superstars were missing. Our A-game talent runs deep.

Reality descended on us: this is a TRADE fair, not a wine festival. Its purpose is to sell wine, find partners and set up new deals. You can’t just roll up at the Burgundy showroom and taste your way through the grand-cru villages; only the anointed set foot in the white-carpeted Champagne Lounge; there are no seats unless you’re at a table discussing prices and volumes.

We wandered lonely as a cloud…. Not really. We’re wine-savvy and inquisitive, so we scouted out favourites from California and Oregon, explored the walk-around tastings from Rhone, Italy, Australia, Argentina, etc. and imposed ourselves on likely-looking producers who were grateful to have somebody to show their wares to. Wine people are the same all over the world so it took only a comment or two to get them animated and engaging.

Three days is a long time to spend on your hind legs. As I’ve mentioned, seating is reserved for those doing business, so if you want to rest somewhere, please join the queue at the food junction and perch on a stool while you consume your canteen cuisine. Then onward and upward in search of the new and unexplored. Our knees took cruel punishment.

We didn’t see everything; that would be impossible, even if you worked at it full-time for all three days. But we did discover new and interesting themes. Austria’s Thermenregion with its signature native varieties, Chile’s new cool south, the Black wines of Bandol, the resurgence of Portugal and Israel’s Dead Sea Valley, among many. There’s a significant presence of spirits and “other” beverages, which looked more like a packaging extravaganza than a trade fair, and which we avoided altogether.

The Messe is conveniently situated near the airport, but there’s not much night-life around there. After hours, the whole show descends on the Altstadt (old quarter), about 15 minutes by U-Bahn, which has more bars and eateries than you can shake a stick at. This is European inner-city life at its very best, with limitless choice and excellent beer, but pitifully poor wine.

By Day 3, the exhibitors were looking as jaded as us and were all making travel plans to interesting destinations. Towards the afternoon, they all abandoned their stalls to explore each other’s products and the show descended into mild anarchy. By now, even the haughty and selective were happy to let you taste, knowing there wasn’t any chance of a deal going down.

We wound up our trip with 5 days in Berlin, Germany’s jewel in the crown, but the wine-culture there is just as dire. You can buy it for off-consumption, but the average restaurant or bar will have only a very basic selection and it’s offered with a sort of mild distaste. Berlin is truly beer turf.

So let’s see what we have learnt: Don’t tour Germany in the winter months (March is still winter); if you want to be pampered at a wine fair, try Cape Wine; if you want to sample the world’s great wines, go via Decanter or Wine Spectator; everything in Germany works properly; they don’t appreciate their fine wine; German food is boring; Germany isn’t. 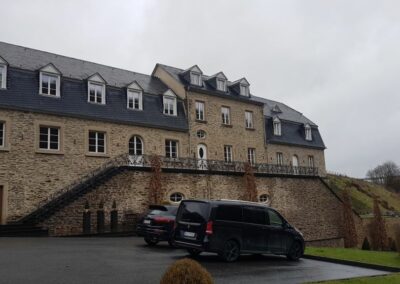 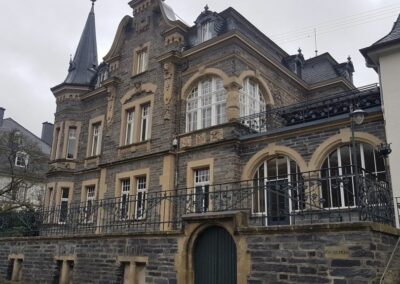 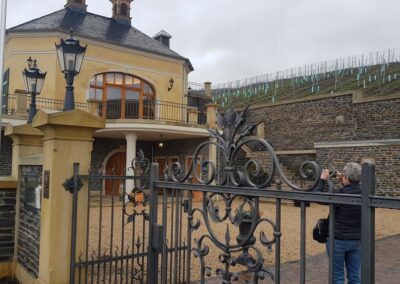 Welcome letter from the new chairperson →